Kaavad is a portable wooden temple/shrine that has visual narratives on its multiple panels that are hinged together. These panels open and close like doors simulating the several thresholds of a temple. The visuals are those of Gods, goddesses, saints, local heroes and the patrons.

It is made by the Suthar (carpenter) community in Mewar for the itinerant Kaavadiya Bhat (storyteller) from Marwar who brings it to his patron’s houses in Rajasthan. This way the deity comes to the devotee rather than the devotee going to the temple. 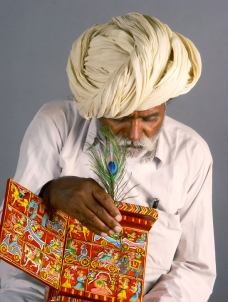 The storytellers unfold the multiple panels of the Kaavad as they recite stories and genealogies of their patrons (jajmans) spread across Rajasthan and adjoining states.

The patrons commission images of themselves in the Kaavad and are represented riding zof their choices, be it a plane, an elephant, a camel or a bullock cart. The experience of travel in the unfolding and the recitation of the stories is akin to performing a pilgrimage. 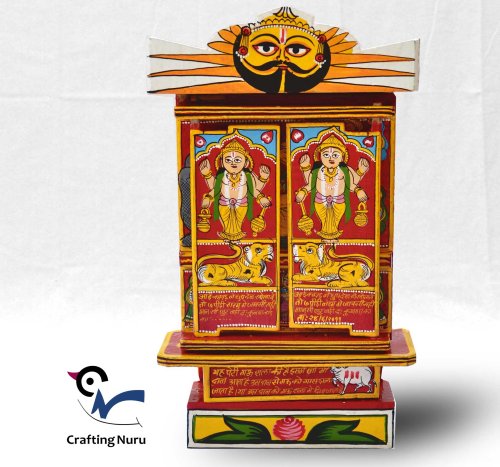 Kavad making looks like a fast disappearing tradition. Not more than 10-15 artisans are left who do this work. Changing lifestyle patterns have made the story narration practise lesser, thus the traditional kavads are no longer sustainable as an only medium for income. So these people have started making smaller kavads as a decorative or gift item which are creating a good demand.

The traditional kavad – popularly known as the Marwari kavad has 10 doors, while artisans have now started making smaller kavads with 8 doors which are smaller models of the originals, not for the purpose of storytelling.

The sizes generally varie from 3 to 12 inch for these smaller kavads and are available in multiple colors, while the traditional kavad was always red. 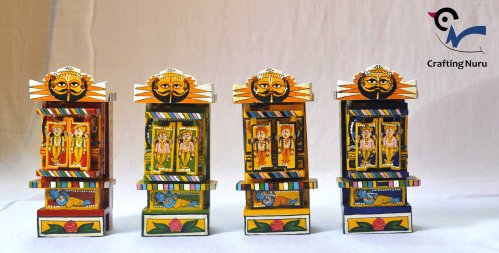 Apart from this, these people have started making kavads as teaching aids – with alphabets AtoZ and other elementary school topics. They are also experimenting with different stories of other religions. However still the demand is more of the smaller version of the traditional kavad.

Presently the demand is not a problem but they find it difficult to reach to market directly and have to sell it to middle men at very low cost.

Crafting Nuru brings the kavads directly from craftsmen at the price they deserve and help them reach the right market.

Continuity with Past.. Indian traditional craft and Indian culture

Its been almost a year that I have been trying to give shape to my abstract thoughts on how to empower Indian Craftsmen and Artisan community.

To this, the 1st question that comes to mind is, out of so many sectors that need support, why to choose only craftsmen community over others. After-all it’s just another profession.

Well there is a defined reason for it. And to understand this, it took me 6 months.

It all started with a documentary film that I made on the topic “Who am I? ..as an Indian” when I was a student at IDC. While making this film I interviewed people from different professions, students, folk-craftsmen and artisans, religious representatives, former prince, politician and government servants, people from archaeological department and many others.

The film raised the question to what being Indian means to them apart from its physical and geographical aspects. What did India represent in the past? How does India fit into modern world?

As answers to these questions, everyone spoke of its culture and character and if we dig more everyone indirectly talked about Indian traditions, art, craft and so on.

When I talked to craft people, they all seemed so dissatisfied with their profession, though they loved their work but they were forced to not let their next generations continue it since it was not economically sustainable way of living in modern world. I was overwhelmed by this situation.

As a designer, we were always taught that “design is a solution to solve a problem”.

And I wanted to solve this problem in my own way as a designer, whatever I could.

When I started researching on this subject that what is already being done to improve their lot, I came to know about various profit and non-profit organizations which were working on the idea to “empower the craftsmen and artisans of india”. There is a lot of support from various govt bodies as well as trusts to such organizations. They have been able to give employment to 1000s of craftsmen who otherwise were out of work.

Though the work done by these organizations are remarkable but I had a question on their basic philosophy.

Did they “empower” craftsmen or did they just provided “jobs” to them?

Well to be practical, this is probably a necessary way to start, but this has to move further to not just preservation of traditional crafts and arts by giving work to these people, butpreservation of the spirit of traditional craftsmanship, the spirit that defined a very large component of Indian Culture, which is what we talk about when we try to explain the meaning of our being an Indian.

Indian traditional craftsmen consider their work as their worship, each profession has their individual Gods whom they pray before starting work each morning. There is a different level of respect, value and motivation to work, and its much more than a source of earning for them. Each individual’s profession is his/her way of life. The satisfaction level out of work done with such inspiration and intrinsic motivation gives an unsurpassed quality of work. There is a motivation to continuously update and innovate the products they make according to the needs of the people they sell it to. They are happy with any amount of money they earn out of such work till its sustainable for their basic living and requirements. The culture is not consumerist, they buy products for their needs, and not wants. Their needs are limited. Very less waste is produced, there is a lot of recycling inbuilt in their lifestyles done unconsciously. They are the people balancing all the excessive carbon footprints we, the people living in urban areas are creating. Their profession and lifestyles were considered respectable and thus they were satisfied.

In present times, things are exact opposite of everything written in the above paragraph. I do not need to rewrite all. We can call them illiterate, but they were culturally literate, knew everything they need to know as well as the basic mathematics. Literacy is not just knowledge of how to read and write, but also the sense of living harmoniously in a society within limited resources, a sense that often most literates lack. We may like to disagree it but we know it and i do not need to mention its effects happening all around us as a proof.

In addition to that, all this is causing an unwilling shift of profession by these people. majority of them cannot read and write. Their disability to read and write forces them to do labor work. At best be a rickshaw wala. Is this shift good for them or for country on the whole? Even if we forget about the culture etc., that most urban youth rejects calling it a ‘philosophical shit’, is this movement of masses of people from villages to cities good? Is it sustainable in long run? Good for environment or economy?

To sum up the conclusion, except agriculture, for all other professions that used to sustain village economy has gone to dogs. Superficially it seems there is no place or requirement felt for this traditional professions in modern India. These professions are no more sustainable either economically for the craftsmen or for the consumers. These are time-consuming processes which make the product cost relatively high to industrialized products and thus out of demand.

The status and respect for this profession has reduced to that of a labour over years. A person sitting 9 hours in front of a computer, working on an excel sheet gets more respect than a person who creates a beautiful product by his hands.

One reason is the difference between the earnings and other is the colonial mind-set which still persists in 90 percent indian minds. Whether it be the attraction towards fair skin, imported cloths, western fashion or preference of sitting in closed glasshouses with AC over a well ventilated office building, we still call that style of living as a better standard of living which resembles more to west. Anyways that is a separate topic of discussion, continuing the discussion further..

There is a void in terms of product requirement and product creation. The products created by them are old-fashioned and do not match the requirements of people. There is a mismatch in understanding of the requirements by the creator, since they both live in very different worlds. Moreover, the spirit of innovation and their own respect for their work has depleted.

So after listing these handful major problems out of the pool of them, here are the question which become my problem statement.

What/who do we want to protect/empower?

How to do that?

Here begins my project, to design solution to the above questions.